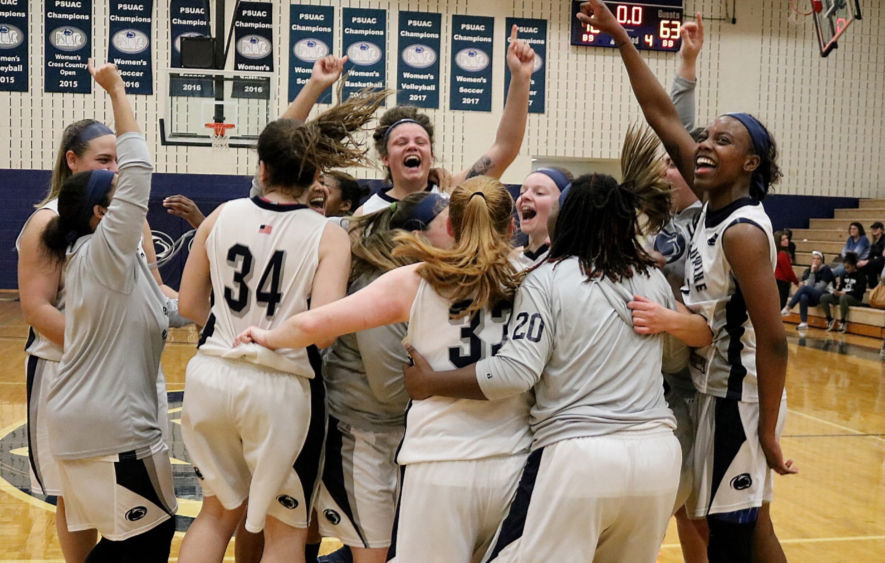 MEDIA, Pa. — Penn State Brandywine made its claim as the No. 1 team in Penn State University Athletic Conference basketball as both its men’s and women’s teams earned conference championships on their home floor Sunday afternoon.

The two championships brought Brandywine’s total to five during the 2017-18 school year as the campus has won all of the conference’s titles in team sports. During the fall, Brandywine volleyball, women’s soccer and men’s soccer all went undefeated en route to winning championships.

Brandywine now owns a 66-4 record against PSUAC opponents this year, a winning percentage of .942. The defending Chancellor’s Cup champion, Brandywine brings a 17-point lead in the standings to the spring, which rates the top athletic department in the PSUAC during the academic year, nearly clinching the title without having played a single baseball or softball game.

For the first time in the 49-year history of the program, Penn State Brandywine can lay claim to being the No. 1 team in PSUAC men's basketball as the Lions won their first-ever league crown, edging third-seeded Penn State Wilkes-Barre 70-63 in front of a raucous home crowd.

Brandywine's championship victory completed one of the best turnarounds at any level of college basketball this season as the Lions, who won six games in 2016-17 and a combined 20 during the past four seasons, earned their 20th victory of the year under the direction of first-year Head Coach Ben Kay. Brandywine, playing in its first conference championship game in 27 years, owns 20 victories for the first time since 2005-06.

As the champion of the PSUAC, Brandywine has earned the conference's automatic bid to the United States Collegiate Athletic Association Tournament in Uniontown, Pa., next week. The Lions will learn their seeding and first round opponent Tuesday evening.

Brandywine, which battled past Wilkes-Barre in double overtime when the teams met during the regular season, overcame an 18-0 surge by the visitors early in the second half by answering with 11-straight points and took the lead for good when senior point guard Donte Winfield sank a layup with 4:26 to go.

The top-seeded Brandywine women’s team earned the PSUAC women's basketball championship for the second consecutive year after knocking off the No. 2 seed Penn State Lehigh Valley 70-63 in front of its home fans.

Brandywine's championship is the program's fourth during Head Coach Larry Johnson's 12-year tenure. Now a six-time PSUAC Coach of the Year after conference awards were announced on Sunday, Johnson has led Brandywine to back-to-back 20-win seasons for the first time in program history as the Lions stand at 21-6 overall this season.

The Lions, who defeated Lehigh Valley for the third time this winter, led nearly wire-to-wire after using a 12-0 run early in the first quarter to build a double-digit lead.

Lehigh Valley had narrowed the margin to one point by halftime at 32-31, but Brandywine used a balanced attack in the third quarter and outscored the visitors 21-11 during the period to vault in front 53-42 with 10 minutes to play.