Men’s basketball takes on Penn at the Palestra 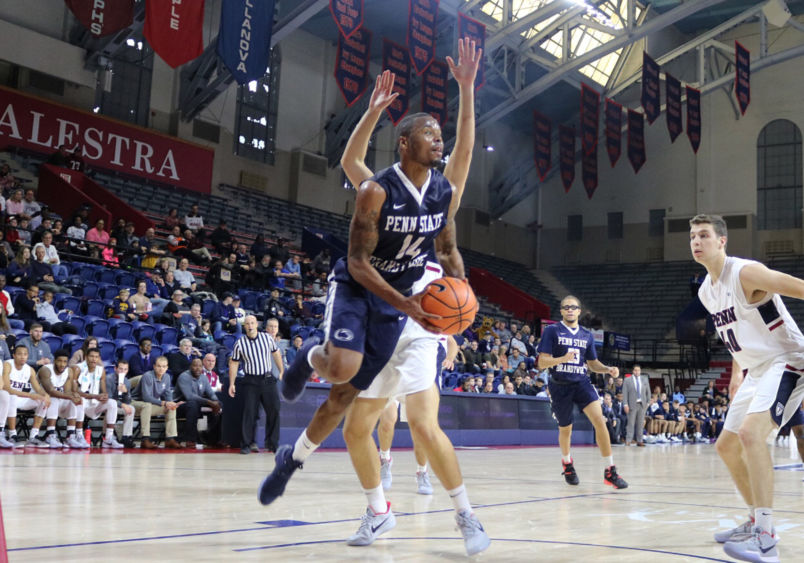 MEDIA, Pa. — It’s not often a non-NCAA team gets an opportunity to play at the Palestra. Even less often does a team from the Penn State University Athletic Conference get to square off with a NCAA Division I opponent. However, both of those opportunities were afforded to the Penn State Brandywine men’s basketball team last week as the Lions faced the Quakers inside of the arena known as the “Cathedral of College Basketball” on Saturday.

The game came about after the University of Pennsylvania was in need of a game with a non-Division I opponent late in the summer as part of a tournament in which the Quakers were competing. Penn assistant coach Ira Bowman reached out to Brandywine’s first-year head coach Ben Kay about scheduling a game.

There was no hesitation on Kay’s part to schedule the game despite knowing it would be a tall task to compete with Penn, which owned a distinct size and speed advantage over his Brandywine squad.

While the final score was lopsided, 99-40 in favor of the Quakers, the game was more about the experience for the Lions. Nearly all of Brandywine’s 16-man roster hails from the Greater Philadelphia area and getting to play a Division I opponent in the most historic basketball arena in the city was a once-in-a-lifetime experience.

Brandywine had previously played at the Palestra on five occasions from 1995-2005, but those games came against the Quakers’ junior varsity squad during a time when the campus was allowed only two-year eligibility for student-athletes by conference rule. Since moving to four-year eligibility in 2005-06, Brandywine had faced its share of NCAA Division III and Division II opponents, but never a foe from the NCAA’s top division.

There are already future plans to face additional Division I teams for Brandywine.

The game against Penn was the second during the opening week of the season for Brandywine as the Lions also posted a 66-62 home loss to Division III McDaniel on Wednesday. The Lions led for nearly the entire game before McDaniel took the lead for good with 93 seconds remaining.

Brandywine will face a total of seven NCAA member schools this season, the most of any PSUAC school, including two matchups this week. The Lions visit Penn State Abington on Tuesday before traveling to the University of Valley Forge on Sunday.

The Brandywine women’s basketball team also got its season started this week with three games against Division III squads. After dropping contests to Rosemont and Neumann, the Lions picked up their first win of the season on Sunday afternoon, running away with a 64-41 victory over Bryn Athyn during the consolation game of the Neumann University Tournament.

After averaging 20.0 points and 3.5 steals in two games last weekend, sophomore Nikki Velez earned all-tournament honors. Velez, the 2016-17 PSUAC Newcomer of the Year and USCAA All-American, scored 25 points, one shy of her career high, against Neumann on Saturday.

Brandywine closes out its season-opening, four-game road trip Tuesday at Immaculata. The Lions host Penn State Berks on Monday, Nov. 27 at 7:00 pm for their home opener.