There are two Friends’ Meetings on Middletown Road (Route 352) near Penn State Brandywine today.  The easily visible one, as drivers head north from Route One, is on the right just before Cumberland Cemetery:  this is “Middletown Monthly Meeting,” the once- Orthodox house, built in 1835.  To see the second, park your car and head diagonally to the right by foot on the grass walkway just past Cumberland, across from the intersection with Yearsley Mill Rd.  Directly ahead and off to the right, off of Old Middletown Road, is “Middletown Preparative Meeting,” first established in 1698 and occupying its present building since 1770; this is the once-Hicksite house.  Even though the division between Hicksites and Orthodox has been healed since the 1930s, the two communities in this town and many others have continued to meet independently. 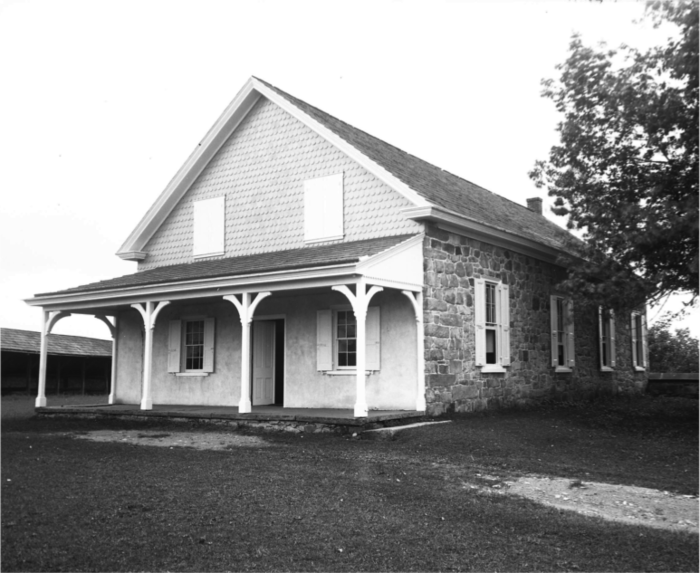 The Preparative Meeting is less than fifty yards from the parking lot of Penn State Brandywine, but few from this campus are aware of its existence.  Those who discover it across Rt. 352 might feel they are stepping into another time, its burial ground framed by eighteenth-century stone walls and covered by grass that, well into the twenty-first century, was cropped by sheep that emerged from the long shed behind it.  It is a quiet place.  But this has been a scene of human conflict, where Middletown’s part in the division of Hicksites and Orthodox took place in 1827 and 1828.

It is also part of our neighborhood portrait.  In May 1828, minister Sarah Emlen led an exodus from the old meetinghouse of all the Orthodox—representatives not only of Middletown but also of Chester, Providence, and Springfield—who had expected to hold their Monthly Meeting there.  Upon arrival they discovered that the Hicksites were locking them out.  Sarah presided over the crisis, and half a century later the Orthodox still remembered her leadership: “They gathered about the stone horse block in the yard, upon which our late Friend Sarah Emlen appeared in supplication”; then, feeling divine support, they departed to meet at the Emlens’ nearby house.52  To do so, the Orthodox and their horses would have taken Middletown Road to the southeastern corner of the Pratt farm, then turned on Yearsley Mill Road until it intersected with Old Forge Road.   All the way they were bordering land now owned by Penn State Brandywine. 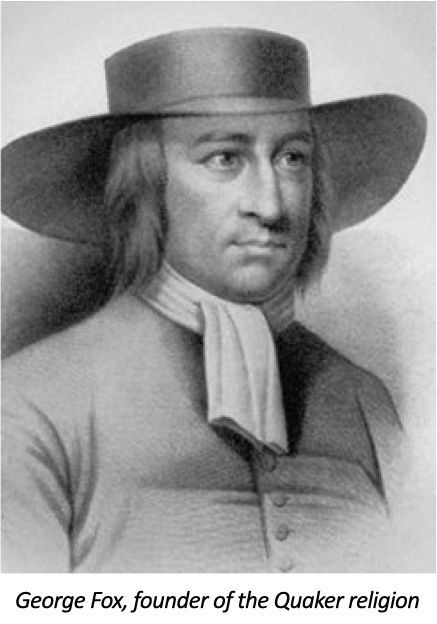 This incident also points to the larger question of how Separation could have come about among a peace-loving people.  Quaker belief and practice were founded by George Fox in seventeenth-century England and brought to the new world by William Penn.  Quakers affirmed that an “inner light” revealed God directly to every individual; and accordingly, their meetings (with no liturgy or Bible-reading) moved from universal silence to speaking by anyone who felt called upon to share his or her illumination of thought and spirit. At the same time the Quakers wanted no chaotic excess of speech and opinion.  They were explicitly a “Society of Friends,” and there was a systematic ordering of local meetings into monthly, quarterly, and yearly gatherings among localities to share and decide policy.  The Monthly Meeting that Sarah led in Middletown was part of this system, but it was dealing with dissent that had come upon the Philadelphia Yearly Meeting in April 1827.

There, followers of Elias Hicks, a Quaker minister from Long Island, had protested that their faith in the inner light was being overwhelmed by more traditionally Christian belief oriented toward the Bible, salvation through Christ, and the authority of wealthy Philadelphia merchants.  Rather than arguing, the Hicksites “separated” and claimed to constitute the authentic yearly meeting.  In return, by the fall of that year, the Orthodox began to “disown” Hicksites by individual name from their meetings at every level.  In both cases the groups seem to have hoped that distance would prevent open conflict.  But, as a Middletown narrative explains, “great clamour presently arose” at Monthly Meetings over which side would keep the original meetinghouse and which would have to go elsewhere.  Sarah Emlen’s Orthodox group moved from Providence to Middletown in an effort to avoid confrontation, but then at last they got locked out there as well, fundamentally because the man who held the key was Hicksite.  Such lockouts were common.  Both sides felt injured, the Hicksites by the insult of disownment, the Orthodox by being physically excluded.  Friendship failed widely; as Quaker historian Thomas D. Hamm comments of the larger divide, “the wounds…were deep and lasting,” and the “rhetoric of both sides…ferocious.”53 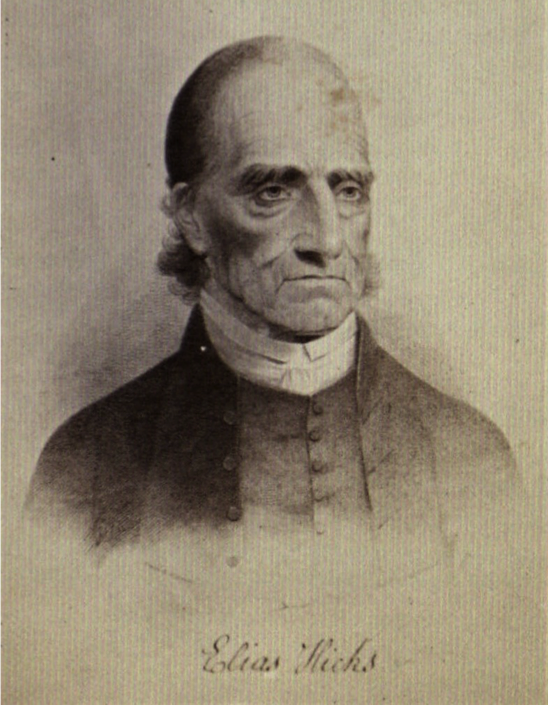 The wounding and the rhetoric come to life in the private papers of the Hicksite Painters and the Orthodox Emlens.  As a memorial to the rupture, the Painters kept copies of the written disownments that each adult member of their family received from the Orthodox in 1828:  Enos for having been an active promoter of separation, Hannah and the younger generation for having “associated with others in holding meetings contrary to Discipline and Subversive of the good order & harmony of our Religious Society.”  Hannah grieved, since her closest friends in the society were on the other side.  Enos turned the tables when James Emlen challenged him about his beliefs, and Minshall recorded the conversation. Was the grace of God, Enos asked, not “sufficient for salvation” even without the Bible, and did James consider its every word inspired?  James replied that civilization did need the Bible to stay on God’s path, and its meaning was “all clear to him.”54

Minshall challenged the whole Middletown community on behalf of the Hicksites, joining a fellow member through these same months in compiling not only an official list of those on each side, but each person’s reasons.   Every adult man and woman was asked for a commitment, and children signed by parental consent.  Thomas Pratt was declared a Hicksite at eleven by his mother and guardians, but Humphrey Yearsley’s guardian spoke over the head of mother Tacy, declaring that “she had her notions and is not fit at all times to judge for her self.”  In fact the Yearsleys chose against the guardian, remaining Orthodox.  Minshall’s procedure was confrontational, especially to people who did not fully understand the controversy, but to his credit he stayed to hear and record their questions and states of doubt.  One man engaged in “considerable conversation” and then refused to sign either way.  An aged and infirm woman kept repeating simply that she was a Friend.  Since both sides were claiming that name and labeling the other differently, this response clarified nothing, but her state of confusion is understandable.  Though the Emlens signed the Orthodox list, they offered no reasons, either because they refused Minshall’s inquiries or because their position was patently clear.55

Sarah and James had a great deal to say, however, and a small part of their expression of Orthodoxy survives in letters and memorials.  Even after leading the monthly meeting to their house in the spring of 1828, for five months the Emlens and their local group continued weekly worship along with the Hicksites at Middletown meeting.  Apparently there was just too little space for them at any private house.  We hear of this difficult time because James had gone on a long journey to Ohio and North Carolina representing the larger Orthodox sect, and Sarah wrote confiding letters from home.  In characteristically Biblical language, she urged him not to fear to “face the Great Goliath of our Israel,” but to go forth like David “with the sling, & smooth stones from the pure stream.”  She did not back away from conflict.  But the ways she experienced conflict herself were so direct and hostile that by August of 1828 she felt “pressed down to the very earth.”  As she told James, on the handrail in front of her seat in the meetinghouse she had found a message in pencil addressed to Sarah Emlen by name and condemning “you poor misguided friends/ To whom the Devil his angel sends.”  “What my dear dost thou think they aim so at me for, what have I done to merit so much of their hatred [?]”  Less than a week later the Hicksites walked out of meeting in protest, and at its end she found another penciled message, this time written on the wall behind her in large letters by a person who had apparently reached down from a window above:  “Celebration of the Hicksits day and downfall of the Orthdx—liberty by the point of the Sword—Orthdx women were d mn bitchs --&c. &c. &c.”56   Such a shocking violation of Quaker charity could be recorded only in private.

Sarah’s letter also went on, however, to say that soon their enlarged schoolhouse would be ready for meetings, and by October she could hear the noise of workmen as she wrote.  Minshall Painter recorded the actual change from the Hicksite point of view on November 2:  “We met today by ourselves, the Orthodox do not now meet with us….I hope they may ever continue away unless they will meet us better conditioned.”57   For seven years thereafter, the Orthodox met in the Emlens’ school by Yearsley Mill, until they could build the meetinghouse on Middletown Road that survives today.    Both Emlens continued to speak out as Orthodox leaders even after they moved to Westtown School in 1835.  The poem that James inscribed in a student’s album offered a more eloquent answer to the question Enos Painter had once posed:  “A man of subtle learning asked/ A peasant if he knew/ Where was the internal evidence/ That proved his Bible true./ The words of skill and studied art / Had never reached his ear/ He laid his hand upon his heart,/ And only answered here.”58   Sarah continued as a traveling minister of considerable stature, inscribing long journals of her experiences as far away as Ireland and London.  Decades later the Orthodox still remembered her as “our late Friend.”  James retired to West Chester after Sarah’s death and wrote copious letters of spiritual advice, eight pages of which are quoted in his memorial.59

After the Quaker Separation, Minshall Painter turned largely to science and civic improvement, and he has even been characterized by one eminent scholar as a deist and infidel with “no use for religion.”  But an important, never previously cited essay, written in October 1828 just as the Orthodox were finally leaving the meetinghouse, shows how deeply rooted he was in Quaker principles.  In “Reflections and observations on the subject of Friends treating with Orthodox Elders,” he tried to recall the Hicksites to the unity and “discipline” that they had long shared with all Friends.  There had been a procedure for dealing with difference, and what happened instead was “highly culpable and very indecorous.” He did feel that the other side’s disownments had begun the decline, but the Hicksites should not have responded with the same anger.  Minshall spoke eloquently from his knowledge as a scientist:  “Must we become as highly charged as they are like two electric balls that are highly charged with the same kind of electricity [?]  Or like the same pole of two magnetic needles before we can possibly repel each other to a sufficient distance [?]”  He also invoked the American Constitution, which had created a nation out of disparate states and people.  In his view Quaker union had been a forerunner of it, and “the disturbances that have and are now taking place are a reflection on the American character.”  Even now he proposed negotiation and reunion.  Or else “we can let those who differ from us depart without casting a censure or a frown after them but bid them go in peace.”60   As his diary revealed on the day the Orthodox actually departed, even he felt emotions to the contrary.  Still he was expressing profoundly the Quaker principle that both sides shared.