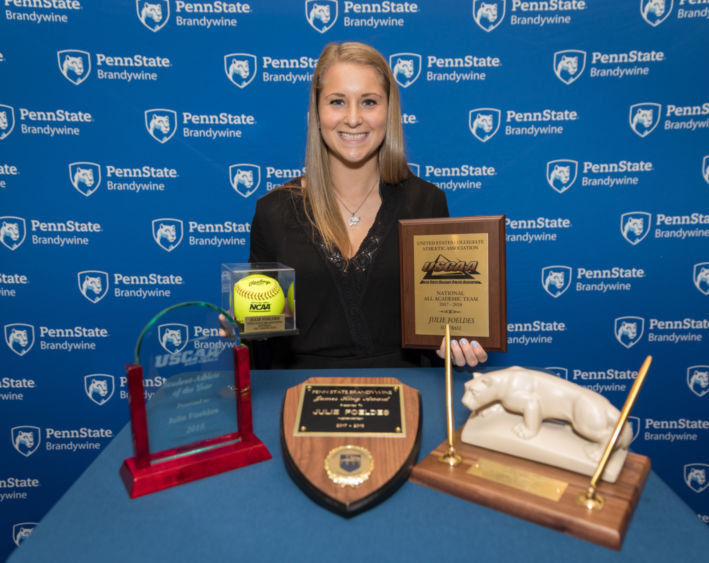 Julie Foeldes earned many awards during her four years playing on the Penn State Brandywine softball team and finished her career with campus, conference and national honors for her academic achievements as a student-athlete.

MEDIA, Pa. — Julie Foeldes, a four-year starter on Penn State Brandywine’s championship softball team who graduated with highest honors in May, was recently lauded at the campus, conference and national levels for her achievements as a student-athlete. Foeldes, who earned a bachelor of science degree in psychology, will begin a doctoral program in school psychology at Rutgers University this fall.

The United States Collegiate Athletic Association honored Foeldes as the Softball Student-Athlete of the Year during its annual banquet on May 13. The award recognizes academic success and community involvement in addition to athletic prowess.

The Penn State University Athletic Conference named Foeldes the top female student-athlete on May 22, presenting her with the John S. Egli Scholar-Athlete Award. To be considered for the award, a student-athlete must have had a distinguished athletic career, have a grade-point average of at least 3.0, be active in additional campus activities, and exemplify high morals, leadership and outstanding character.

Foeldes said she valued Brandywine’s small class sizes and the ability for students to really get to know their professors — along with the athletic program, which is what first attracted the New Jersey resident to the campus.

“My experience at Brandywine was very personal,” she said. “I had teachers who got to know me well. Upper-level classes really built on lower-level classes, even classes that weren’t directly related to psychology, and I feel like I’m well prepared for my graduate work.” 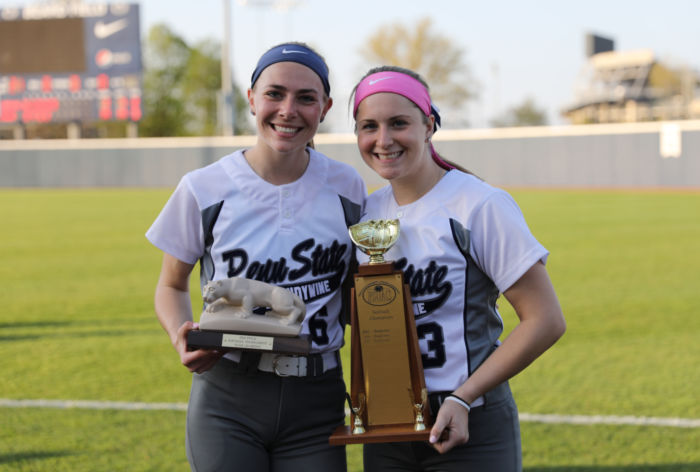 “Brandywine allowed me to continue to play a sport I love for four years,” Foeldes added. “I made good friends, improved my time-management skills, and was part of four championship teams, which not many people can say.”

Foeldes credits much of her academic success and her interest in school psychology to the influence of Josh Marquit, assistant teaching professor of psychology at Brandywine. She enrolled in several of his classes, starting with Introductory Psychology during her first semester, and later worked with Marquit as a teaching assistant. He also guided her research on the effects of youth sports participation on the child-parent relationship, which she presented at the campus’s annual exhibit of undergraduate research.

“Julie is a very gifted student and very engaging,” Marquit said. “She was persistent in her school work and her projects. I have used her projects in my classes as examples of good quality work.”

“She’s dedicated to professional development, which I don’t often see at the undergraduate level,” he added. “A lot of students don’t develop that characteristic until later in their academic lives.”

Foeldes appeared in all 148 softball games during her four years at Brandywine and finished her career with 108 hits. As team co-captain this year, she helped connect the campus with Team IMPACT, a national program that places children with serious and chronic illnesses with college athletic teams.

“Julie is a role model for our student athletes, especially in the classroom,” said Sarah Kurpel, Brandywine’s director of athletics. “Her diligence and commitment demonstrated in all areas of her life, in her school work, on the softball field, with her teammates, and in the community, embody what it is to be a Penn State student. We are grateful that Julie is a part of our community at Brandywine athletics and even more excited to see what is in store for her in the future.”