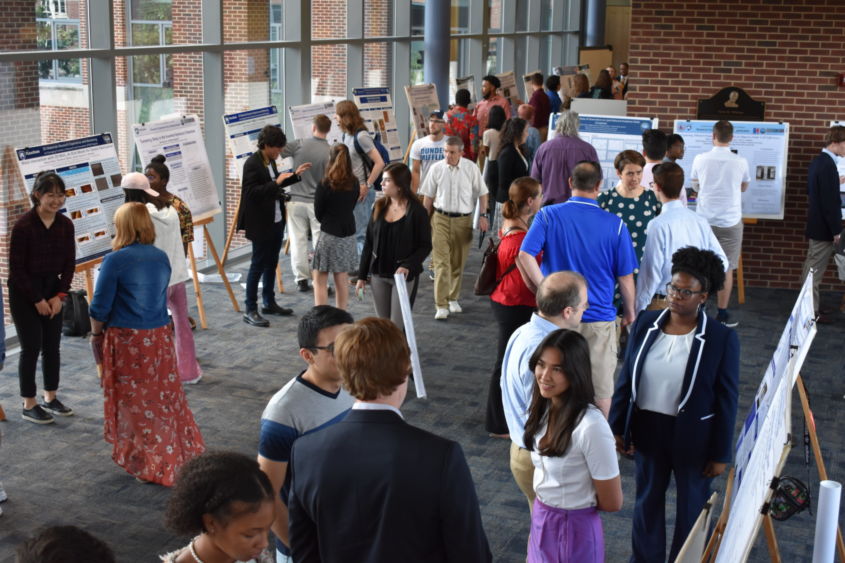 Undergraduate students from across the United States presented their summer research projects at the Research Experiences for Undergraduates Symposium on July 30. Forty-four of these students will return to Penn State to present their research at the first international conference on the science of drawdown.

UNIVERSITY PARK, Pa. — Undergraduate students from across the country are returning to Penn State next week for the first international conference on the science of drawdown, the point at which greenhouse gases in the atmosphere begin to decline. The students, participants in this past summer’s Penn State Drawdown Scholars Research Experience for Undergraduates Program, will present results from their summer research projects from Sept. 16-18.

The conference, called “Research to Action: The Science of Drawdown,” is a joint effort hosted by Penn State and Project Drawdown, a research organization dedicated to identifying and studying solutions to reverse climate change.

“It is equally as important to share the research as it is to do the research,” said Whitney Ashead, a Drawdown Scholar and a senior double majoring in agricultural science and geography at Penn State. “This conference provides me with the opportunity to share what I’ve learned in a meaningful way with people who are in the Drawdown community and beyond.”

Ashead will present her research on reducing nitrous oxide in agricultural systems during the conference poster session. She will also serve as a panelist during the “Feeding the World in 2050: An Introduction to the Drawdown Food Sector” session, which will highlight one of Project Drawdown’s seven focus areas.

She was mentored by Armen Kemanian, associate professor of production systems and modeling in the College of Agricultural Sciences. Together, Kemanian and Ashead used a computer simulation model to examine how the depth at which crops are tilled could affect the amount of nitrous oxide produced. Nitrous oxide has 298 times more warming potential than carbon dioxide, and Ashead found that shallow tillage could reduce the production of nitrous oxide without changing the crop yield.

Fellow Drawdown Scholar Christopher Contos will also present his research during the poster session and serve on another panel, titled, “More with Less: Better Production, Reducing Consumption, and Using Waste to Get to Drawdown.” The panel focuses on another Project Drawdown sector: Materials.

Contos, a junior majoring in electrical engineering at Rowan University, spent his time at Penn State analyzing how a more energy efficient cooling system could reduce greenhouse gas emissions across the globe. He was mentored by Susan Trolier-McKinstry, Steward S. Flaschen Professor of Materials Science and Engineering, and Qiming Zhang, distinguished professor of electrical engineering.

“The conference is a wonderful opportunity to not only share what I have worked on and learned, but also to actively listen to and network with some of the brightest minds working toward reversing climate change,” Contos said. “I hope to connect with inspiring individuals who have similar goals while broadening my own knowledge of the efforts being made to communicate and reach drawdown.”

Forty-four Drawdown Scholars will participate in the conference by presenting their research, serving as a panelist or giving a talk. Ultimately, according to Ashead, the event’s main goal is to take advantage of the opportunity to learn more.

“I hope to walk away from the conference with action items on how to make a positive impact, while also knowing the people that can provide guidance,” Ashead said.

The conference will be livestreamed. More information is available on the Research to Action: The Science of Drawdown website at drawdown.psu.edu/livestreaming.