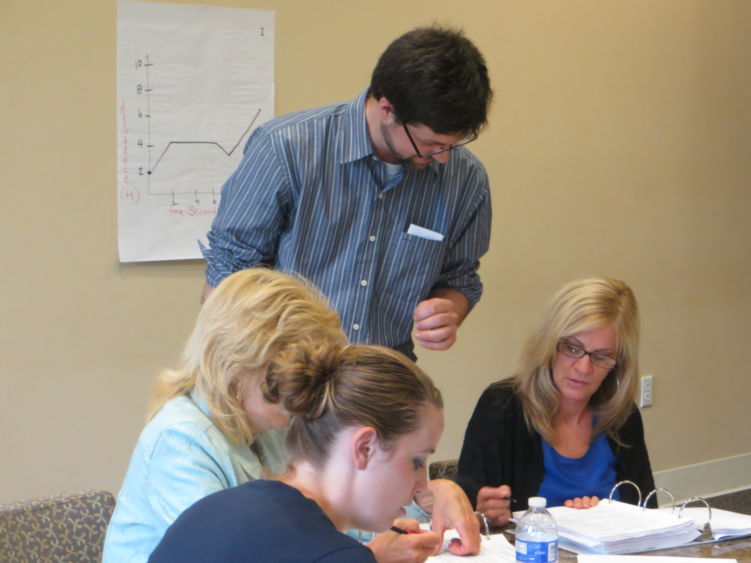 UNIVERSITY PARK, Pa. — The Pennsylvania Math Initiative (PMI), founded at Penn State in 2012, once again will be hosting professional development workshops aimed at improving the mathematics fluency of elementary school teachers. The workshops, held at four Penn State campuses across the Commonwealth, are led by experienced mathematicians and educators. The program is designed for K-5 teachers with the goal of empowering teachers to implement their mathematics curricula with confidence, build productive mathematical practices, and improve teaching methods.

"College instructors are dependent on high-quality teachers in the elementary and secondary grades,” said Andrew Baxter, lecturer in mathematics at Penn State and director for PMI. “Their students will become our students, so we want to offer these kinds of professional development courses to help teachers improve their mathematical fluency so they in turn can provide the highest quality of education."

The daily content of the two-week-long workshops is split between mathematical knowledge and classroom practices. The first week’s theme is “Math as a Second Language,” which focuses on how the rules of arithmetic fit together to form a cohesive system and how a teacher can encourage students to think mathematically. In the second week, participants continue to deepen their mathematics background with “Algebraic Thinking and Proportional Reasoning.” This workshop makes clear how mathematical concepts from elementary grades support the mathematics that students encounter in middle school and beyond.

“I don’t think there could have been a better class or course to help me prepare for teaching fifth grade math for the first time,” said one workshop participant. “I now have a better understanding of how to help build the students’ math foundations up conceptually, rather than just teaching them procedures to memorize. I am going to try to implement more meaningful questions in my classroom that will help the students to become better problem solvers.”

Assessments completed by past participants have shown that the workshops have a significant positive impact on teachers' mathematics knowledge for effective teaching. One participant from 2016 shared, “Prior to attending this training, I did not enjoy teaching math. After attending only one week, my entire math teaching outlook changed and it is now my favorite subject to teach.”

In order to provide access to as many elementary teachers in Pennsylvania as possible, the workshops are held at the following Penn State campuses:

The workshops for 2017 are already filled, but PMI expects to offer similar workshops for the summer of 2018. PMI is hosting 95 teachers from 37 different school districts this summer. The program has grown every year since the first workshop in 2013, which hosted 8 participants from 3 districts.

Founded by George Andrews, Evan Pugh Professor of Mathematics at Penn State, the PMI workshops are based on the model created at the University of Vermont — the Vermont Mathematics Initiative (VMI) — which has operated continually since 1999.  A six-year study of students of VMI-trained teachers revealed significant growth in student achievement.