Philadelphia-area native transfers home from Oregon, thrives at Penn State Brandywine and then gets involved at University Park 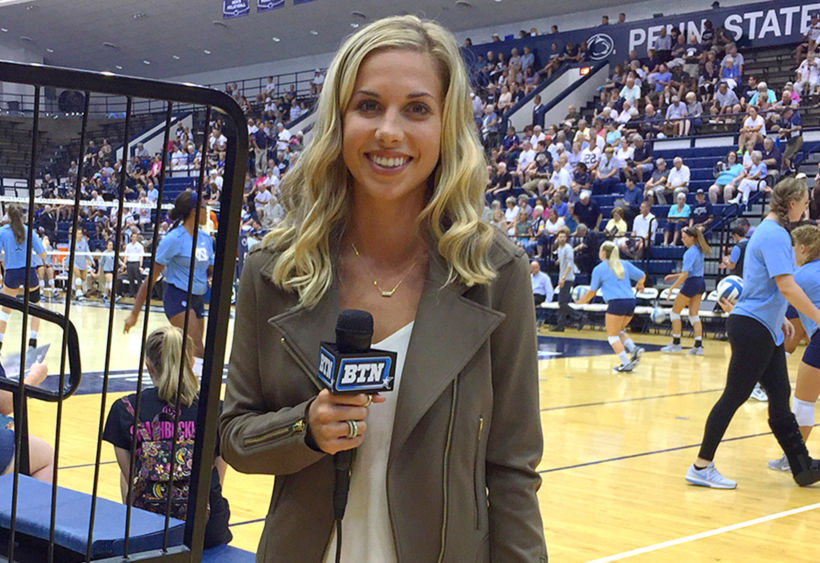 Erin Kate Dolan "can't ask for anything better" than numerous opportunities she has found at Penn State.

UNIVERSITY PARK, Pa. — For one Penn State student, watching the Philadelphia Phillies was a part of growing up.

Erin Kate Dolan is a native of Media, Pennsylvania, which is located about 20 minutes outside of Philadelphia. She recalls listening to Harry Kalas, the legendary Phillies play-by-play-broadcaster who died in 2009, with her grandfather.

In 2008, the Phillies downed the Tampa Bay Rays to win the World Series. Dolan remembers Kalas’ famous call: “The Philadelphia Phillies are the 2008 world champions of baseball.”

So, it was only fitting that Dolan apply for the Kalas Award, a college scholarship awarded by the Philadelphia Broadcasters Foundation to aspiring sports broadcasting professionals. The regional award is given to an upper class college student who is pursuing a career in sports broadcasting and making a positive influence in the community.

She proved to be a deserving applicant, becoming the first female to win the award.

“The award was a huge accomplishment because I finally felt that my work had paid off. I’ve been promoting myself for over two years, especially on my website,” said Dolan.

After winning the award, Dolan was invited to attend a Phillies game and was recognized on the field. In addition, she toured the facilities and was interviewed by TV and radio broadcasters.

Dolan has always been a Philadelphia sports fan. It wasn’t until she was a freshman in college at the University of Oregon that she pinned down exactly what career she wanted to pursue.

Dolan landed in a journalism class her freshman year. Originally, she wanted to drop it. “I ended up loving it,” said Dolan. “As soon as I did one thing on camera, I knew this was the field I wanted to work in for the rest of my life.’”

Still, Dolan believed she could pursue her dreams closer to home, specifically at Penn State. Her decision was in part because of proximity and in part because Oregon’s class schedule, which lasted until early June, prevented her from landing summer internships in Philadelphia.

After a year and a half at Oregon, Dolan transferred to Penn State Brandywine for a semester. She moved to the University Park campus this fall and has wasted no time getting involved.

Already, Dolan is a member of ComRadio, PSNtv and the Association for Women in Sports Media. Aside from schoolwork, she writes for SB Nation and is an ESPNU Campus Connection reporter. She has done a college football podcast called “Opening Drive” for ComRadio and was a Student U sideline reporter for the Big Ten Network during a Penn State women’s volleyball match.

“That was the first time I ever did anything live. The crowd was so loud that I could barely hear myself talk,” said Dolan. “This was one of the best opportunities I’ve had so far with broadcasting.”

Following graduation, Dolan would love to work close to home covering Philadelphia sports, possibly for Comcast SportsNet. Another possibility, she said, would be moving to Boston and working for the New England Sports Network. Down the road, she has bigger goals, such as being a reporter for ESPN or Fox Sports. Until then, she’ll take advantage of all of the opportunities she can at Penn State to set her up for future goals.

“It’s great. I can’t ask for anything better,” she said. “I have been able to join multiple clubs where everyone shares the same passion for sports. Students and administration have been supportive and extremely helpful since I transferred to Penn State.”