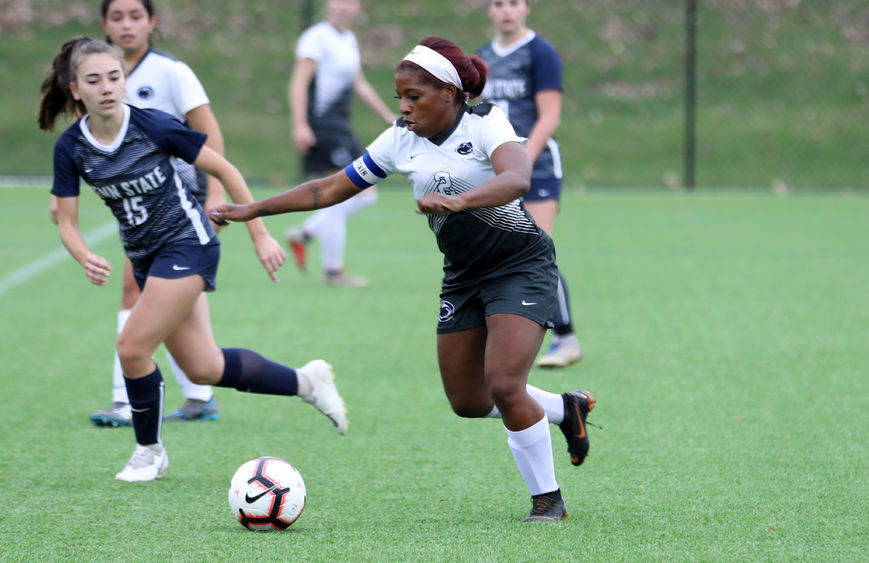 Despite not moving to varsity status until 2015, Brandywine women’s soccer produced the top decade of any PSUAC women’s soccer team, winning four-straight league titles from 2016 to 2019. In five seasons as a varsity team, Brandywine owns a 40-1-1 record against PSUAC opponents.

Banks is a 2019 graduate of Penn State Brandywine with a degree in human development and family studies.

Bush started in net during four-straight seasons from 2016 to 2019. She landed three all-conference selections and two all-American awards, while tallying a career record of 41-15-2 in 63 matches. Bush was a two-time conference leader in shutouts, while topping all PSUAC net minders in wins three times. She was a four-time conference champion, while leading Brandywine to an appearance in the 2018 national championship game.

Bush received her bachelor’s degree in psychology in 2020.

A midfielder, Florschutz was a three-year starter from 2017 to 2019. She earned First Team All-PSUAC and USCAA All-American honorable mention laurels following the 2019 season when she tallied two goals and five assists. Overall, Florschutz produced 12 goals and 34 total points during her 48-game career, while winning three conference championships.

Florschutz graduated in 2021 with her degree in biology.

Iannello played for Brandywine during the first three years of varsity women’s soccer from 2015 to 2017, playing in 33 matches. She collected 10 goals, six assists and 26 points, while receiving First Team All-PSUAC accolades as a freshman. Iannello played in three conference championship matches, winning the final two in 2016 and 2017.

Segich, a three-time all-conference selection, played in 52 matches from 2015 to 2018. A two-time first team all-conference honoree and the 2018 PSUAC Defender of the Year, Segich collected 17 goals and 12 assists during her career. Also a standout on the softball diamond at Brandywine, Segich was a member of eight conference championship-winning squads, winning four titles in both women’s soccer and softball.

A 2019 graduate, Segich received her degree in business.

Weir earned four all-conference awards and two all-American selections from 2016 to 2019, while helping Brandywine win four PSUAC titles. She totaled 19 goals and 23 assists for 61 total points, including career-best totals of 12 goals and eight assists as a freshman. The team’s second-leading scorer all-time, Weir played 62 career matches as a forward, midfielder and defender. Academically, she earned a trio of USCAA National Academic Team awards.

A human development and family studies major, Weir completed her degree in 2020.