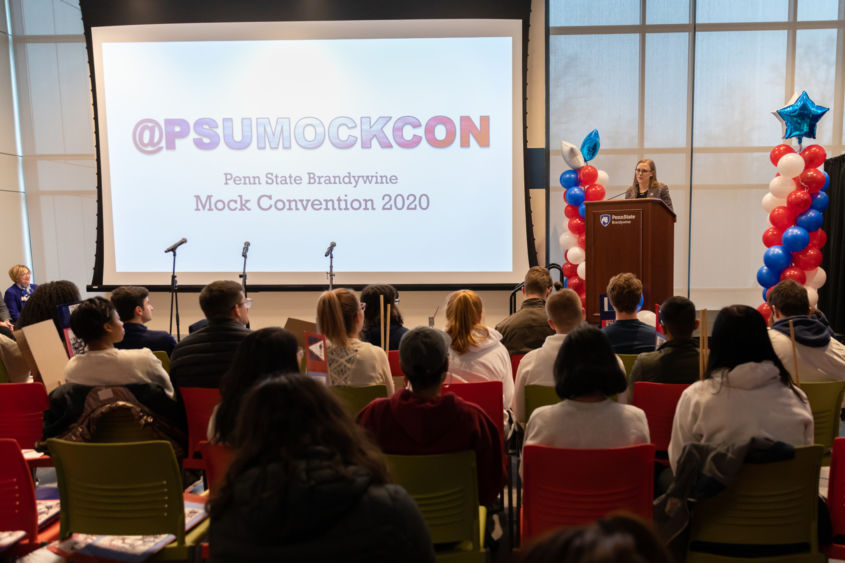 Pennsylvania Representative Jennifer O’Mara was one of several local elected officials to speak about the importance of civic engagement at Penn State Brandywine's mock convention, which was held on Feb. 6.

MEDIA, Pa. — Former Vice President Joe Biden is likely to be the Democratic nominee for president, according to a simulated nominating convention held at Penn State Brandywine.

The prediction resulted from several months of research by students, faculty and staff, each of whom was part of a state delegation. The delegations researched the issues important to the state they represented to determine how their state is likely to vote in the 2020 state Democratic primaries and at the 2020 Democratic National Convention.

During late January, participants cast a vote for a candidate based on how they believed residents of their designated state would vote. The campus voting simulated the state primary elections.

On Jan. 28, a parade and celebration featured mini-floats decorated to reflect each state or region.

During the culminating mock convention held Feb. 6 on campus, representatives of each state stood and announced which candidate their state had selected, resulting in the prediction of Biden as the Democratic nominee. Prior to the final tally, several local elected officials talked about the importance of civic engagement and the electoral process. Speakers included Pennsylvania state Reps. Leanne Krueger and Jennifer O’Mara and Delaware County Council Member Christine Reuther and Controller Joanne Phillips. 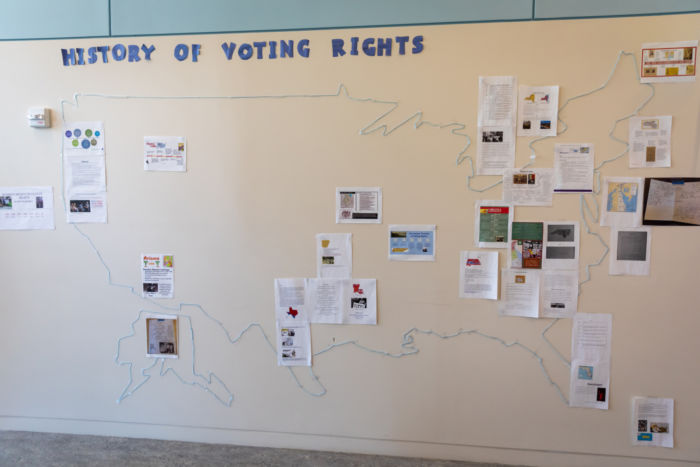 In conjunction with the mock convention, students created a voting rights display in the campus' Student Union.

The mock convention, held at Brandywine for the first time, was modeled after similar events at other colleges, some of which have been holding mock conventions for more than 100 years. The goal of the nonpartisan, mostly student-led simulated nominating convention was to successfully predict whom the party not currently in the White House will nominate to run for president.

In addition to serving as a research project, the mock convention provided students with leadership and social opportunities and greater civic awareness. The initiative was coordinated by Marinda Harrell-Levy, assistant professor of human development and family studies; Ronika Money-Adams, director of student affairs; and Vippy Yee, Rosenberg Director of Brandywine’s Center for Ethics and Civic Engagement.

In conjunction with the mock convention, students in the Living in a Diverse World (WMNST 105N) class created a display in the Student Union focused on voting rights. The display included an outline of the U.S. and a history of voting rights in many of the states.

“With both the mock convention and the centennial for the passage of the 19th amendment approaching in 2020, I wanted the students to focus on voting rights,” said Margaret Signorella, distinguished professor of psychology and women’s, gender and sexuality studies. “The class is intended to get students thinking about the connections among different social roles and experiences that intersect with gender. Voting rights is an exemplar of that intersection because social class, race, gender and age all impacted the progress of voting rights in the U.S. and across the globe.”

Signorella noted that although the 19th amendment prohibited denying or abridging the right to vote based on sex, in actuality access to voting occurred unevenly across the United States.

“By doing this assignment, the students were also able to see factors and roles that were associated with voting restrictions and the differences across the country in the progress of voting rights,” she said.