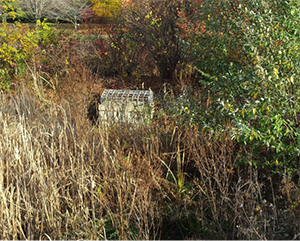 The University constructed our Gabion detention pond in 1992, as part of the Ethel Sergeant Clark Smith Memorial Tennis Court construction project. The wall was built with more than 100 Gabion baskets filled with stone. This facility prevents stormwater from freely flowing into Rocky Run Creek, a tributary to Chester Creek. The water held in detention is slowly absorbed into the ground to naturally filter it to underground streams.

In 2006, the campus’ detention stormwater basin was installed as part of the main campus entrance project. It captures stormwater from Route 352 which keeps pollutants out of the tributary that runs through campus. This tributary empties into Rocky Run Creek which joins Chester Creek and eventually goes to the Delaware River. 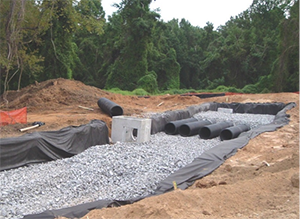 The campus has a subsurface detention system which was built in 2007 when the new maintenance building was constructed. This system is under the parking lot in front of the building and captures rain from the parking lot and the roof of the building. Stormwater travels through a pipe system and is absorbed into the earth with a very minimal amount going into the stream.