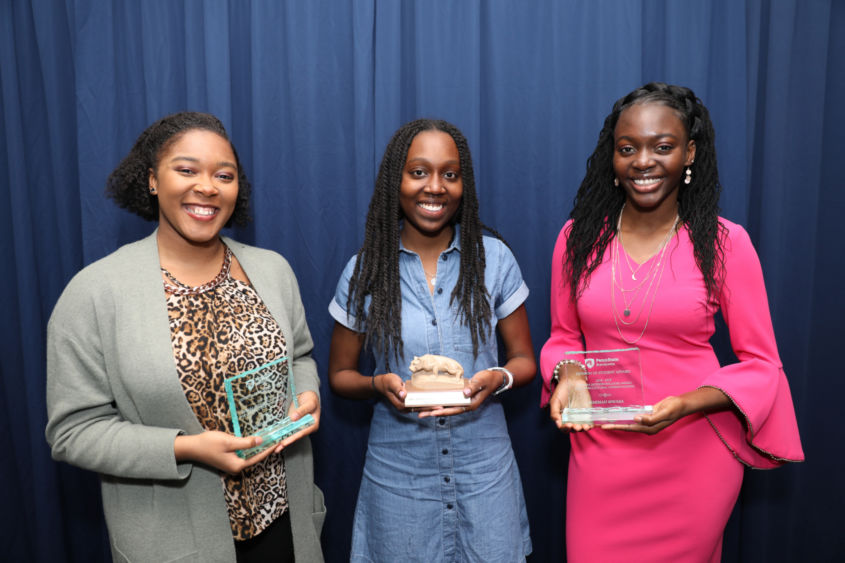 MEDIA, Pa. -- Penn State Brandywine students who have impacted the campus through their leadership and service were honored at the student leadership recognition night on April 10. The annual ceremony highlights the achievements of students involved with clubs, student government and campus programs.

Maddie Beebe received the Eric A. and Josephine S. Walker Award. This prestigious award recognizes undergraduate students whose outstanding qualities of character, scholarship, leadership and citizenship have been directed into programs and services that have positively influenced fellow students and have contributed to the prestige and well-being of their campus and Penn State at large.

Subaita Ahmed won the Outstanding Service to Campus and Community Award, which recognizes a student who has volunteered their time to assist others. She is involved with the Sustainovation Club, the Multicultural Student Club and service projects.

Danni Guth and Duc Luong were honored with the Diane D. Shorter Award, which recognizes a student or event that contributed to the spirit of civic engagement through raising awareness of and enlisting campus involvement toward supporting a cause. Guth is president of the campus’ Active Minds Chapter and Luong is active with the Civic and Community Engagement Club.

Keiaisha Jackson and Jemimah Mwaba received the Barbara Jackson Williams Award for Cross-Cultural Understanding, which recognizes a student who provides outstanding service in initiating multicultural involvement and awareness on campus. They are both active with multiple campus groups, including the Multicultural Student Club, Lion’s Roar Step Team, Nittany Christian Fellowship and the Black Student Union.

Chevelle Thomas was awarded the Deborah J. Erie Student Leader Award, which recognizes a student who demonstrates leadership qualities and contributes to building campus pride. She is president of the Lion Ambassadors and vice president of the Student Government Association.

Vippy Yee, Rosenberg Director of the Center for Ethics and Civic Engagement and advisor to the Civic and Community Engagement Club, received the Club Advisor of the Year Award, which recognizes a faculty or staff member who shows that they are truly engaged in the activities and mission of the student organization.

The Black Student Union received the Student Club of the Year Award, which recognizes a student club or organization that has shown exceptional involvement throughout the year and has contributed to the quality of student life by promoting campus involvement.

The MarComm Club’s 3-on-3 basketball tournament was named Outstanding Program or Event of the Year, a distinction that recognizes a program or event sponsored by a student organization that has enhanced the quality of student life by promoting campus community and Penn State pride.

Brandywine Events & Activities Support Team (BEAST) recognized two club members serving as leaders and role models within the organization. This year’s Emerging BEAST recipient was Ryan Peterson, who chaired the Palentine’s Day committee, and the Exceptional Service to BEAST Award was given to Maddie Beebe, who served as co-chair of the group.

Shayla Hatchett was honored with the Outstanding Service to Student Affairs Award, given to someone who demonstrates exceptional services to the student affairs office. She assists with many student activities and often staffs the welcome desk in the Student Union.

Lian Kiziroglou received the Resident Assistant of the Year award, which honors the RA who has been the most consistent, dependable staff member in all aspects of their responsibilities while creating a stronger, more vibrant and inclusive residential community through their work and attitude.

Alexa Moreschi and Kennedy Cherry received the Residential Program of the Year Award, which is given to the organizers of a program that had a large positive impact on the residential community while promoting the development of respect and responsibility. They coordinated the Secret Valentine’s program.

Health Services was honored with the Residence Life Campus Partner of the Year Award, given to a department, faculty or staff member, or student organization that partnered with residence life to sponsor programs supporting conflict management, bystander intervention, community expectations or inclusive language and action. 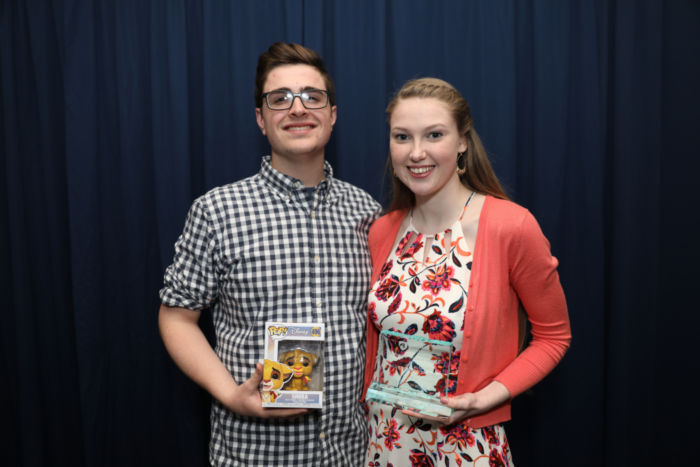 Ryan Peterson (left) was the recipient of this year's Emerging BEAST Award, while Maddie Beebe won the Exceptional Service to BEAST Award.