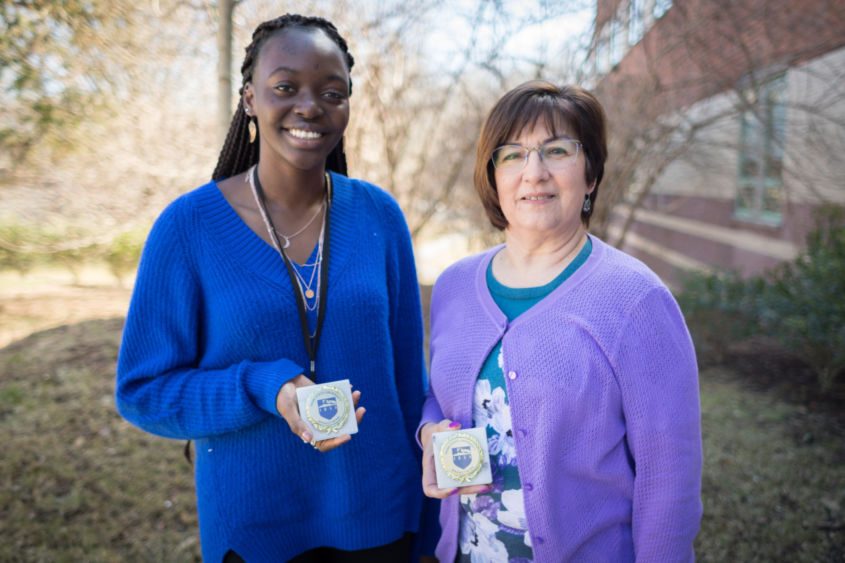 Penn State Brandywine's Commission for Women presented two awards for outstanding contributions to the campus and community at the commission’s annual Women’s History Month luncheon on March 12. Sophomore Jemimah Mwaba (left) received the student Woman of the Year award, while Lecturer in Information Sciences and Technology Nannette D'Imperio received the faculty Woman of the Year award.

Mwaba, who was named student Woman of the Year, is president of the campus’ Lion's Roar Step Team, secretary of Nittany Christian Fellowship, a member of the Black Student Union and attended the 2018 Pennsylvania Conference for Women. A business and psychology major,  Mwaba, who was born in Zambia and grew up in the Democratic Republic of Congo, has also been part of the dance team and the musicians’ collaborative.

“Jemimah has really stood out to me for her involvement and the way she shares her culture with the campus community,” said Bill Tyson, Brandywine’s director of marketing and communications, as he announced her award.

“I was very surprised to receive the award,” Mwaba said. “I have been working so hard this year. Being more actively involved and present was a goal for me and this award just fuels me to keep going. It feels amazing to know that people see and support what I have to offer to this campus.”

Kathleen Yanoshak, lecturer in accounting, presented the faculty Woman of the Year award to D’Imperio, who teaches courses in computer science and information science and technology and advises the Women in Engineering Club. D’Imperio’s research interests lie in the use of programming languages, web-based learning and its applications.

Keynote speaker Tanya Dapkey, a research technician and entomologist at the University of Pennsylvania, spoke of the need for women in science to support one another. She is co-founder and co-leader of the 500 Women Scientists Philly Pod, a group that promotes STEM (science, technology, engineering and math) education, provides a community for women scientists to support each other, and encourages a fact-based dialogue on public issues.

Dapkey is working to catalog the Lepidoptera, an order of insects that includes butterflies and moths, who live in the Guanacaste Conservation Area, an over 600-square-mile protected wilderness in Costa Rica.