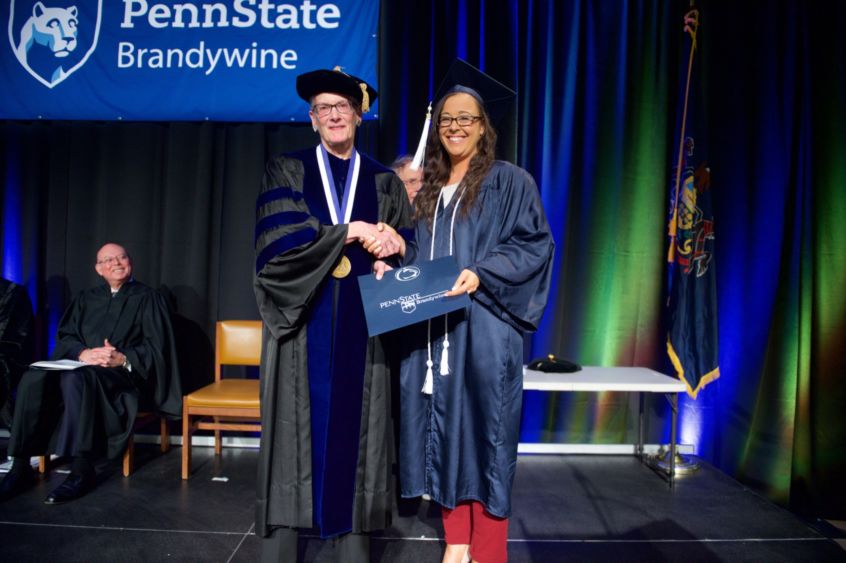 MEDIA, Pa. — When Stacy Foy graduated from Penn State on Dec. 14, she gained much more than a diploma. For her, commencement day was the culmination of a 15-year journey.

Foy graduated from high school in 2003 and immediately enrolled at Penn State Brandywine. However, after two years at the Brandywine campus and one year at University Park, she withdrew from her studies.

“School just wasn’t working out,” said Foy. “I was 20 and didn’t understand the importance and value of it, so I left. I stepped away for six and a half years.”

Foy had been working in retail since she was 16, and after leaving Penn State, she devoted more of her time to employment. She became a manager for American Eagle Outfitters, a job that paid well and surrounded her with colleagues that she appreciated — but after a few years, she began to realize that her dreams were elsewhere.

“American Eagle was a great store and a good work environment, but I started to really think about my future, and I realized that I had other career goals for myself — and those plans included finishing school,” she said.

In 2013-14, Foy made the decision to go back to Brandywine and complete her degree — this time with new focus and determination.

“I could have finished school online or elsewhere, but I've always had a great experience at Brandywine, from right after high school to now. I found the help and attention I needed. The people here kept me moving forward.”

“It was a personal goal for me to finish well and become a college graduate,” she said. “And this time, my husband and I were paying for this ourselves, and that was a big factor in my motivation. I put my time, money and effort into this, so I want to do well.”

To get the most out of her return to school, Foy, a communications major, opted to take advantage of Penn State’s academic renewal program, an opportunity that allows a returning student who has been unenrolled for more than four years to retake courses, boost their GPA and start from scratch.

“It took me a little more time, but academic renewal turned out to be very valuable for me. It was like a refresher—and this time around, I really had interest in the subjects,” said Foy.

It was near the end of her Penn State career that Foy landed an internship with LevLane Advertising, a Philadelphia-based advertising and public relations company. The company was not looking for interns at the time, but appreciated Foy’s prior experience in the working world. They brought her on as a digital content and public relations intern. After her internship, the company brought Foy on as a part-time employee.

Foy completed her 15-year Penn State journey in mid-December and in January transitioned from part time to full time at LevLane Advertising.

“Commencement meant a lot to me,” said Foy. “The point of coming back to school was to get out of retail and try something new. This worked out perfectly.”

Today, Foy is a newly minted Penn State graduate and spends her days doing what she loves: working in a field she enjoys and spending time with her husband and their daughter. Although she is excited to move on, she said she will always have a place in her heart for Penn State Brandywine.

“There’s a reason I came back here,” she said. “I could have finished school online or elsewhere, but I've always had a great experience at Brandywine, from right after high school to now. I found the help and attention I needed. The people here kept me moving forward.”