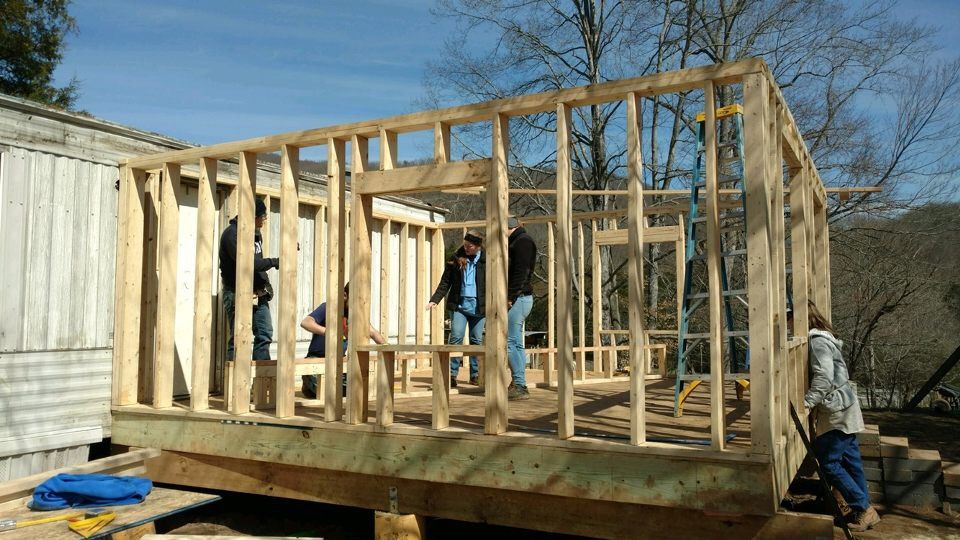 Students in Brandywine’s Nittany Christian Fellowship club spent their spring break upgrading the homes of low-income families in rural Virginia. For one of the volunteer projects, students built walls and a roof for a two-room addition to a one-bedroom trailer.

“Last year, we partnered with students from Christian Student Fellowship at Penn State Berks to volunteer with a ministry in Washington, D.C.,” said Betsy McCole, a sophomore computer science major and treasurer of NCF. “This year, we worked with the Berks club again, but it was a very different trip.”

The students volunteered with Appalachia Service Project (ASP), a Christian ministry that brings people together from across the country to help upgrade the homes of low-income families in rural central Appalachia. Since 1969, the ministry has partnered with nearly 400,000 volunteers to repair 18,000 homes.

“We worked in Lee County, which is the most impoverished county in the state,” said Pat Drago, president of NCF and an engineering major at Brandywine. “ASP is improving the standard of living there by making homes warmer, safer and dryer.”

The Berks and Brandywine students split into two teams and worked on separate houses. At one job site, the Penn Staters remodeled a bathroom and worked on flooring repairs. At the other, they erected walls and a roof for a two-room addition to a one-bedroom trailer.

Rather than send the homeowners away during the renovations, ASP works closely with them. McCole’s team, which worked on the two-room addition, had a chance to bond with the mother and two children who lived in the home they were fixing.

“The family has four boys in a one-bedroom trailer home,” she said. “The dad went to work and the older kids went to school during the day, but we got pretty close to the mom and younger kids.”

For most of the NCF students, who hail from the greater Philadelphia region, this was a new glimpse into an often underemphasized national issue — rural poverty.

“Most people focus on urban poverty,” said McCole, “but the difference between urban and rural poverty is that rural often affects the whole community. We were volunteering in a town where coal mining was the people’s whole existence. When the coal industry does badly, the whole town suffers.”

In addition to exposing NCF students to a significant need in the United States, the trip gave club members a chance to grow closer as peers while serving others.

“It was exciting to watch students begin to grasp that not all national challenges look like the ones we experience in or near Philadelphia,” said Nick Garrety, associate pastor of Delaware Valley Christian Church and campus ministry affiliate. “It was also exciting to watch them grow in their understanding of teamwork, service and even basic construction knowledge.”

As NCF looks toward the upcoming school year, the club plans to continue pursuing service opportunities both on and off campus. According to Drago, Garrety and McCole, servant leadership is a critical component of their club’s greatest mission.

“As Christians, we are called to love and serve our neighbors,” said Drago, “and we can’t just pick and choose elements of our faith to better suit our own convenience. That’s why we use spring break, the only time we’re all free, to live out our Biblical calling to help those in need.”