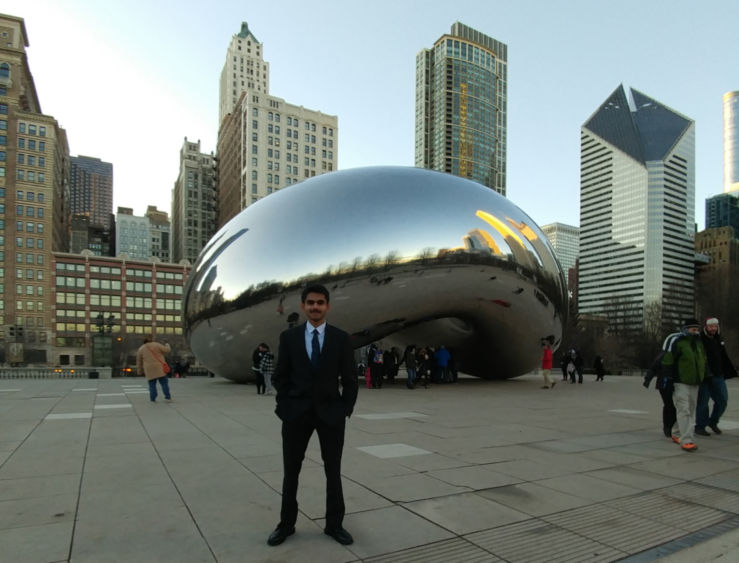 “I was mostly just attending the career fair for the overall experience,” he said. “I barely had a résumé — although the Brandywine Office of Career Services had just helped me improve mine.”

However, a conversation at that career fair became the springboard for Gambhirwala’s first internship — an involved position at United Airlines’ facility in Chicago.

Gambhirwala gave his résumé to a United Airlines representative at the Brandywine career fair and was surprised a few months later to find himself in correspondence with the company about summer internship options. After an interview process, he found himself in Chicago working with the company’s department of technical operations.

“As a freshman going in, I was thinking of all the stereotypes,” said Gambhirwala. “People always joke that interns are basically around to run errands and make coffee. But my internship was hands-on from the moment I got there, facilitating my growth and helping me gain new skills.”

His internship with “chronics,” a team at United Airlines dedicated to tracking daily damage reports, gave him plenty of chances to grow. The office tracked the reports, monitored their severity, and worked with aircraft mechanics and corporate representatives to resolve the issues.

Gambhirwala found himself in a number of different roles. He tracked the new chronics reports and ran basic data analytics for the department. He also helped improve the chronic tracking system through a time study, finding ways to streamline the process.

The experience was so positive that Gambhirwala is already interviewing for another internship with the airline in the future.

“The internship taught me many things about component engineering, which I can certainly apply to my major,” he said.

Having returned to the classroom for the 2017-18 school year, Gambhirwala has found that offsite internships and in-class experiences, while different environmentally, require the same amounts of discipline and patience.

“An internship requires the same amount of diligence that is required in school,” he said. “You need to be level-headed and keep yourself on task.”