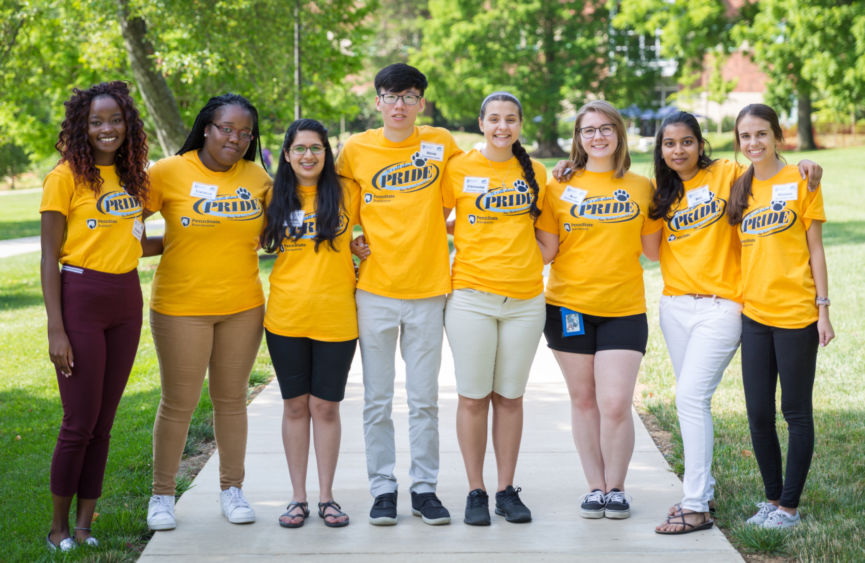 “Honestly, I didn’t even want to go to it,” Persaud recalled. “It was a bit nerve-wracking, sitting there and watching so many unknown faces walk into the building and thinking to myself, ‘One of them is going to be in at least one of my courses.’”

But Persaud’s day took a turn for the better after some dialogue with the other first-year students. She also connected with an orientation leader (OL) — a student ambassador to the incoming class.

“One of my orientation leaders was super nice to me — not only on my NSO day, but in a course we ended up having together my fall semester,” she said.

Avula and Kapur also remember orientation leaders who helped them. In fact, they can identify those students by name.

“There was an orientation leader, Haleigh Swansen, who made my day very bright,” Kapur said. “Because of her, I decided to get more involved on campus and to be a role model as an OL.”

One year later, all three students are back at Brandywine’s NSO — this time as orientation leaders themselves.

“An orientation leader is a mentor,” Avula said. “A friendly mentor, if you will. He or she is pretty much responsible for your first impression of the school in which you are going to spend the next four years of your life. That’s a huge responsibility.”

Brandywine OLs are selected through an application and interview process that considers a student’s grade point average, campus involvement and character. At NSO, they welcome students to the event, lead them around campus, conduct icebreaker games, answer parents’ questions and serve as general resources to the incoming class.

As NSO leaders, Avula, Kapur and Persaud also enjoy the sense of camaraderie that has grown between them and their fellow student-leaders.

“I have enjoyed working with the other OLs,” said Kapur. “We are all very unique, and together, we make a great team. All of us have different college experiences, which enhances NSO.”

“Some of the current OLs have been my classmates for more than a semester,” Avula said. “I met the rest of them during training and we all hit it off immediately. Even though we barely knew each other, all of us already had this feeling that we were a team.”

As Avula, Kapur and Persaud prepare to return to their own studies on campus this fall, they all believe that they will continue to see themselves as Brandywine student ambassadors.

“I was in the new student’s position once,” Persaud said. “I want to show them that they can have someone to count on when they need help on campus — to help them find their comfort zone in this ‘new home.’ That gives me great satisfaction — knowing that you can help others with something you were struggling with before.”