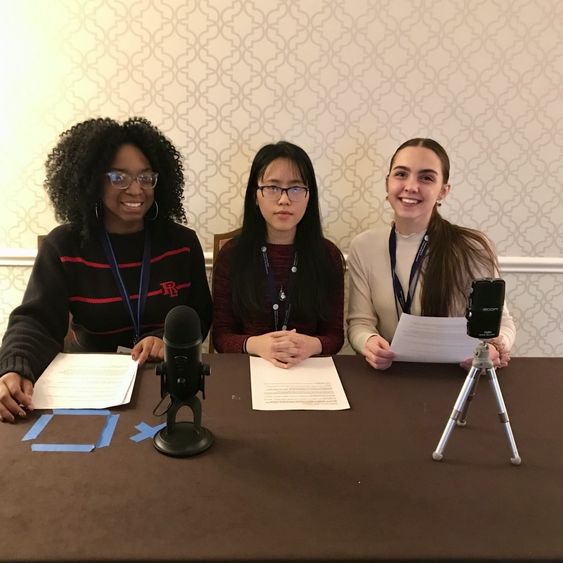 MEDIA, Pa. — When Penn State students Anna Nguyen, Alsatia Haas-Tome and Dallas Barber took on the task of creating the first-ever podcasts recorded at the National Council for Science and the Environment (NCSE) Annual Conference, they didn’t expect that they would gain the experience, clarity and connections to accelerate their careers.

The conference, held from Jan. 6 to 9 in Washington D.C., brought together scientists, educators, policymakers, business leaders and government officials to engage in a dialogue about environmental policy and decision-making.

The opportunity came about after Nguygen, a 2019 Drawdown Scholar, attended the first international conference on Drawdown, held at Penn State’s University Park campus last September. Nguyen was invited to sit on a panel, where she spoke about her podcasting experience. During the Q&A, NCSE Executive Director Michelle Wyman asked Nguyen if she would lead a similar project for the NCSE.

The NCSE, which funded the project with support from Penn State, extended the invitation to two additional students. Professor of Earth Science Laura Guertin knew Haas-Tome and Barber were the right students to round out the team.

“They were both in my Earth 103 class last semester and both did a podcast for the class. I learned not only their technical skills but also their personalities,” said Guertin. “I'm always looking for students where I can see there's a spark there. I'm not always looking for the ‘A student’ — I'm just looking for someone who has the personality, the character and the work ethic.”

“I like to take any opportunity I can, and it was really such a great honor to be invited,” said Barber. “That Dr. Guertin had faith in me to do something like this — I think that was my main motivation for accepting.”

Guertin also knew that the group’s diversity would contribute to their success. Nguyen, a sophomore food science major, Haas-Tome, a sophomore psychology major, and Barber, a first-year international politics major, each brought their own unique skills and perspectives to the project.

Their podcast series, “Voices of NCSE,” addresses a variety of topics — from “Noise Pollution and Policy” to “Collaborating for Environmental Health and Justice” to “What Gives Us Hope” — and features interviews with scientists, federal employees, teenage climate activists, an Emmy award-winning journalist and others. Collectively, the series speaks to the impact of interdisciplinary work and the power of storytelling in the sciences.

“Storytelling can be a channel for communication across all sectors,” said Haas-Tome. “We don't have to be the same person or have the same interests to listen to the same story and connect with it.”

The project quickly became a highlight of the conference. Several times, the team had a line of attendees outside their production room waiting to be interviewed.

“There were professional scientists and professional policymakers who were asking them, ‘How do we learn more about storytelling?’ and so they were also getting consulted by some people there, which is just incredible,” said Guertin.

“People at the conference were very open to what we had to say,” said Nguyen. “It feels really reassuring to know that regardless of my age, my opinion will be counted.”

Barber, who said she gained the clarity to pursue a career in foreign service, even left the conference with a mentor, Marcia Bernicat, a U.S. diplomat and current principal deputy assistant secretary in the Bureau of Oceans and International Environmental and Scientific Affairs.

Since the conference, both Barber and Haas-Tome have solidified plans to study their respective subject areas abroad — Barber in Wales and Haas-Tome in Vienna and Budapest. Likewise, both Haas-Tome and Nguyen are now considering graduate school.

When asked what they want listeners to take away from their podcast, the trio unanimously agreed on "hope" and pointed to a closing thought from one of their interviewees, journalist Frank Sesno.

“We cannot get so mired by those difficult things, those troubling things, that we take our eyes off of also those inspiring things. Otherwise, you just lose hope," said Senso. "At a time of climate change, at a time of population growth, at a time of great challenge all around the world, that sense of genius the human spirit conveys — the American spirit, too — is a very important thing to keep hold of, because that’s the beacon. That’s what we strive for. That’s what will get us to the other side of the lake.”

To listen to “Voices of NCSE,” visit https://sites.google.com/psu.edu/voices-of-ncse-2020/podcasts. For more information about the NCSE Annual Conference, visit https://www.ncseglobal.org/conference.