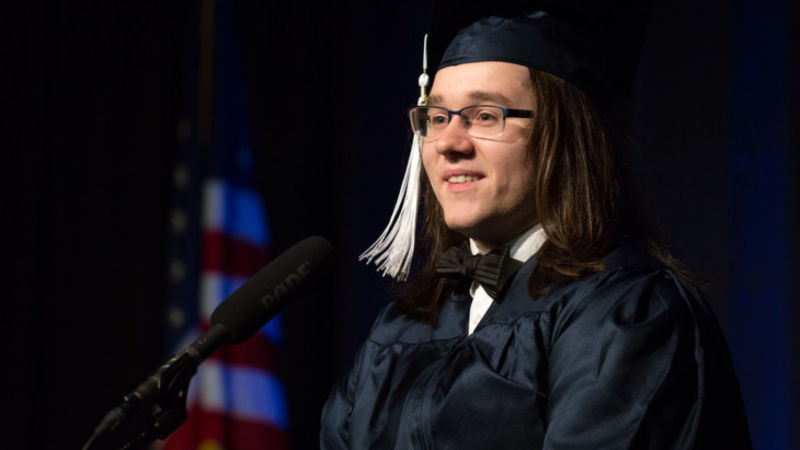 When Brian Fairfield and Max Schmid couldn’t find Penn State degrees that matched their hopes, they created their own through a little-known University program: the bachelor of philosophy degree

When Brian Fairfield and Max Schmid couldn’t find Penn State degrees that matched their hopes, they created their own through a little-known University program: the bachelor of philosophy degree.

Often mistaken for a four-year philosophy program, the bachelor of philosophy degree (BPHIL) is a unique, intercollege major that allows students to essentially design their own degrees.

“BPHIL is a way for students to create a curriculum for a major unavailable at the University,” said Schmid. “You work with professors and advisers to design your own curriculum.”

“The program’s very flexible,” Schmid said. “You can take some very interesting course combinations as long as your general requirements are met and you can present a case for why that course will enhance the degree you’ve constructed.”

For Fairfield, the BPHIL program gave him a way to study crossover between two separate Penn State degrees: philosophy and psychology.

“I was interested in studying interconnections between psych and traditional philosophy,” said Fairfield. “In essence, BPHIL gave me a blank slate to take that interest and make it a degree.”

The BPHIL program culminates in a capstone project, which Fairfield and Schmid both opted to complete in the form of a final thesis.

“Since I’m also a Schreyer Scholar, it was easier for me to work on my honors thesis and my BPHIL capstone together,” Schmid said. “I defended it twice — once for Schreyer and once in front of the BPHIL committee.”

“Both Brian and Max worked tirelessly with their faculty advisers, mentors and professors to coordinate with the BPHIL committee at University Park,” said Pat Hillen, coordinator of the BPHIL program at Brandywine. “Both theses were accepted and lauded as excellent capstone projects, with impressive and interesting research.”

Fairfield’s thesis applied psychological and philosophical research to the concept of personal well-being, pulling from texts and opinions spanning hundreds of years.

“I took the subjective aspects of psychology and philosophy and brought them together to comment on uncertain parts of life,” he said. “In studying relationships, for example, I connected modern psychologists’ thoughts on trust and vulnerability to Aristotle’s conception of friendship.”

Both students believe the BPHIL program allowed them greater freedom to personalize their research experiences. They also found a wide net of support in the Brandywine faculty — especially Schmid, who transferred to Brandywine after four years at University Park.

“Evan Bradley, my thesis adviser, is an excellent professor and supported my ideas immediately,” said Schmid. “And I got that vibe from all of the faculty here — they wanted to see me succeed. Having that type of support was great.”

Both Schmid and Fairfield look forward to applying their research and custom degrees outside the University, as they graduated on May 6.

“I’m going to Towson University for a four-year doctoral program in audiology,” said Schmid. “Even though I don’t have the typical undergraduate degree for that program, I used BPHIL to give myself the necessary background in communication sciences and disorders.”

“Attaining a BPHIL major as part of a double major is extraordinary,” said Hillen. “I couldn’t be happier for both Brian and Max and the places they will go next. They did Penn State Brandywine proud.”